Based on the three factors such as TNM stage, PSA and Gleason score, the patients are classified into high, intermediate and low risk groups. The low risk patients are usually treated with radical prostatectomy or radiotherapy alone.

Prostate cancer is staged using the TNM system. This is used all over the world. It separately assesses the tumor (T), lymph nodes (N) and secondary cancer (metastases – M). 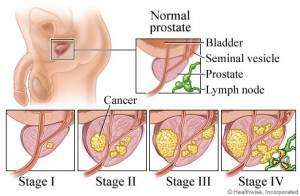 There are four Stages of Prostate Cancer that we have discussed it below. Following are the different Stages along with their treatments.

In stage I, cancer is found in the prostate only. The cancer is found by needle biopsy or in a small amount of tissue during surgery for other reasons (such as benign prostatic hyperplasia). The PSA level is lower than 10 and the Gleason score is 6 or lower. It is found in one-half or less of one lobe of the prostate. It cannot be felt during a digital rectal exam and is not visible by imaging. They usually grows very slowly and do not show any symptoms at the early stage. The cancer is very small and completely inside the prostate gland, which feels normal during a rectal examination.

In stage II, cancer is more advanced than in stage I, but has not spread outside the prostate. If it is not treated then it is likely to spread outside of prostate. If the patient is so elder or having more complex diseases or after watchful waiting there are no any significant increase in growth of cancer tumor, then in such cases

Radical Prostatectomy and Radiation Therapy are the preferred options. Stage II is divided into stage IIA and stage IIB.

The PSA level is lower than 20 but higher than 10 and the Gleason score is 6-7. It is found by needle biopsy or in a small amount of tissue during surgery for other reasons.

In this stage, the cancerous cell has significant growth. Cancer tumor has spread beyond the prostate gland but not has reached to bladder, lymph nodes, rectum or any other organs. Some times for elders doctors prefer to go for watchful waiting stage. This is preferred only if patient is having many sever complications or other illness.

The PSA can be any level and the Gleason score can range from 2 to 10.

This is the final stage of the cancer and usually it is not curable. It has grown into the bladder or rectum, or has spread to the lymph nodes or another part of the body. It may spread to the bones, liver or lungs type of distant places. In this case, removing any part of the body will not solve the problem. It is preferred to wait and watch for the elder person.

We have discussed here different stages of prostate cancer along with their Prostate Cancer Treatment.

For more information you can visit our website: http://www.mpuh.org/centreforroboticsurgery/

For Prostate cancer treatment robotic surgery is a common choice to try to cure prostate cancer if it is not thought to have spread outside the gland (stage T1 or T2 cancers).

A less invasive surgical option – Laparoscopy is available for urologic surgery that uses small incisions. But, due to some the limitations of laparoscopy procedures it is not suggested
for more complex urologic surgeries.

One of the most modern and effective way of surgery is robotic radical prostatectomy surgery. It is a minimally invasive approach, using the latest Da Vinci Robotic Surgical System and
it is ideal for delicate urological surgeries.

Dr. Mahesh desai is the head of robotic surgery for prostate, kidney and urinary bladder cancer at Muljibhai patel urological hospital ( Centre for Robotic Surgery) in India. He is Top Urologist in world. It is the first super specialty hospital in India dedicated to Urology. We serve our patients for more than 35 years and we are popularly known as “Nadiad Kidney Hospital in India”.

Dr. Mahesh Desai, the Medical director of famous MPUH hospital – Nadiad, has explained me in details about the side effect of prostate removal, when he decided to go for an operation for my prostate cancer. The important thing for me was to know that a patient loses the control over urinate after the surgery, and that lasts for indefinite period – it can be for a few days, weeks or even for a few months. Once the prostate is removed, and if the muscles are not strong enough, patient will not be able to have control over urinate.

For the purpose, Dr. Mahesh Desai strongly recommended me to do exercise regularly. The physiotherapist – Dr. Vijay gave me enough training for all type of exercises. These exercises are very simple, but patients have to do them regularly – before and after the surgery. Dr. Vijay has repeatedly reminded this instruction and I started following it.

Dr. Mahesh Desai performed my surgery on 28th May, 2013. After the surgery, all the doctors were regularly following up with me and all of them – including Dr. Desai have strongly recommended to continue the exercise. The physiotherapist – Dr Vijay used to visit twice a day, and kept on guiding about the exercise. Even the nursing staff reminded the same. I was worried about urine leakage. I followed the advice of Dr. Mahesh Desai and his team about the exercise quite sincerely. At hospital, I had nothing to do that is why I kept on exercising throughout my stay.

The catheter was removed on the seventh day after my surgery. Now, the urine was supposed to come out naturally. I was at a point, for which I was afraid of the most, when I couldn’t control the urine. Luckily, after few hours urine started naturally. I was very worried about controlling urine and I was praying God to take me out of this situation as early as possible. As per the instruction and the guidance given by expert team of doctors, I continued my exercise regularly. After removal of the catheter urine was passing naturally. I could feel urge of the urination. I could stand up and reach to toilet. Gradually I could hold urine up to four hours then five hours and finally up to six hours!! I was amazed that there was no single incident of urine leakage during the entire day. I made doctors aware about it and they were happy as well. When Dr. Mahesh Desai came for a visit in evening, I informed him about it. He was very happy and he added that “this is the result of your regular exercise”. It’s been 15 days, when I am writing this, since the catheter is removed. I still do exercises regularly and follow doctor’s instruction very carefully. I am glad that there is no single incident of urine leakage till now.

Friends, I just want to tell you one thing. Like every patient wants the best doctors for their treatment, even doctors want their patients to follow all their instructions. My own experience of following doctor’s instructions, kept me away from shameful situation of urinary incontinence. Such things give big relief to the patient. So every patient should follow the doctors’ advice very strictly and do the exercise regularly.