What is Kidney Cancer?

Kidney cancer is the cancer which starts when cells in the kidney body begin to grow uncontrollably. Sometimes the cancer remains limited to the kidney, while in other cases it spreads to nearby tissues and organs.

Not all tumours in the kidney are cancerous. Some are benign (non-cancerous), and do not spread (metastasize) to other parts. However, they should still be removed as they can grow and create problems later.

Most of the benign kidney tumours are removed or destroyed by using the same type of treatments as used for kidney cancers, like robotic kidney surgery, etc. 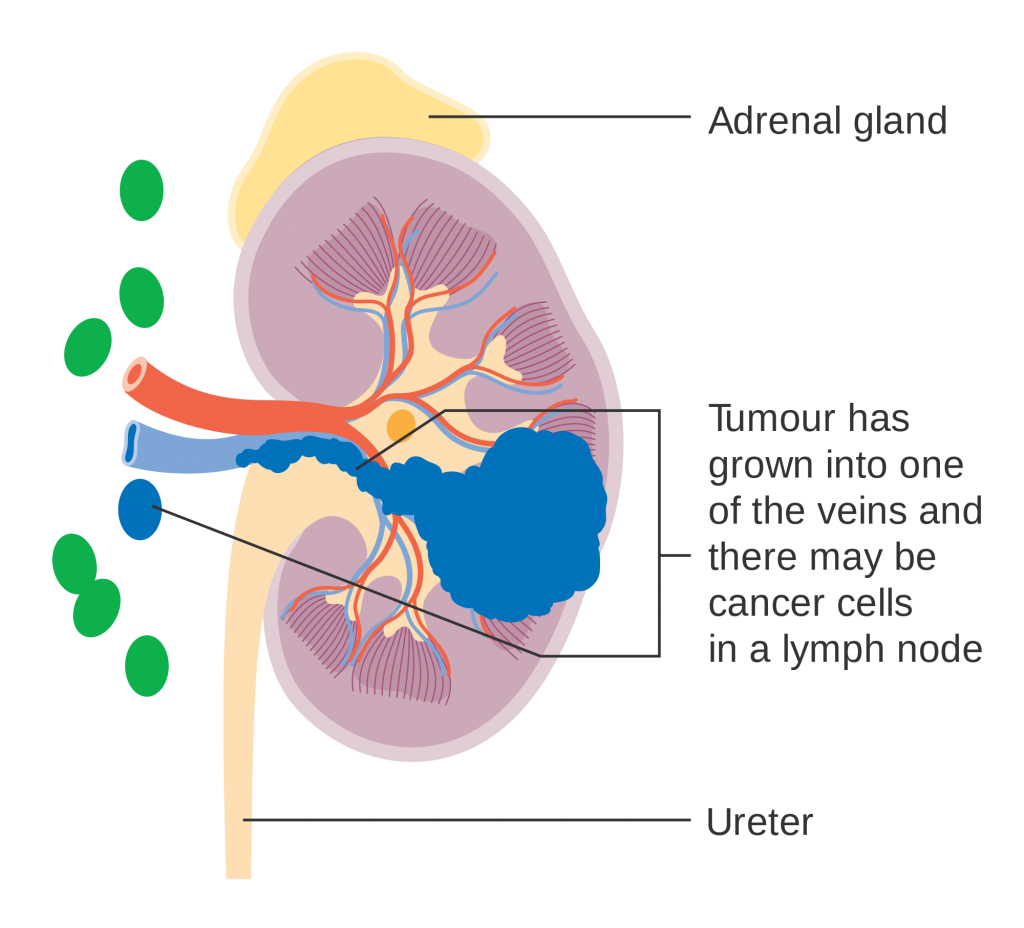 The exact cause of prostate cancer is not known, but researchers believe there are certain risk factors which cause the prostate cells to turn cancerous.

In very simple terms, cancer of prostate is caused when the DNA of a normal prostate cell changes. Such changes to a person’s DNA can be either inherited at birth or acquired during the lifetime.

Apart from the above, there are some more factors listed below whose exact effect on prostate cancer is not known:

Usually early stage prostate presents no symptoms, and hence, gets diagnosed only in the later stages when these symptoms become more pronounced.

Following are some of the main signs and symptoms of prostate cancer:

However, most of these symptoms can also be caused by other non-cancerous conditions such as enlarged prostate, urinary infections, etc. And hence, the exact cause of the above problems can only be determined by a proper diagnosis by a doctor.

The following are the various methods used by a doctor to determine the presence of prostate cancer:

In this you doctor might ask you about any problematic symptoms you having, family history and other risk factors. He may also conduct a Digital Rectal Exam (DRE) to feel for any bumps on the prostate that may indicate presence of cancer. Based on this initial assessment, he may order further tests.

The Prostate-Specific Antigen (PSA) blood test is one of the first tests done, mostly in men with no symptoms, to screen for cancer.

PSA levels under 4 nanograms per milliliter (ng/mL) of blood are generally considered normal, but this cannot be ascertained without a biopsy. As PSA level increases, the chance of having prostate cancer does too.

In this test, a small probe is placed in your rectum and transmits a black and white image of the prostate onto a computer. TRUS is often used PSA level is high or an abnormal DRE result is seen.

If any of the above tests indicate to the doctor that cancer may be present, he will do a prostate biopsy.

In this procedure, few small samples of the prostate gland are removed using a thin hollow needle, and observed under a microscope to see if they contain cancer cells. If yes, it is given a grade called Gleason Score.

Prostate cancers are assigned different grades based on the Gleason System, which tells how comparable the cancerous tissue is to the normal prostate tissue.

Most cancers are graded 3 or higher, as grades 1 and 2 are not much relevant.

The ‘stage’ of a prostate cancer indicates the extent to which the cancer has spread, and is one of the most important factors in assessing prognosis and determining treatment options for the patient.

Prostate cancer stages are decided based on the following:

Majority of doctors use the TNM System for determining the prostate cancer stages and their spread.

The following stages are most commonly used to describe the spread of the cancer:

Stage 4 prostate cancer is currently incurable, but there are certain treatment options that can help reduce the painful symptoms of advanced prostate cancer.

Once the stage of prostate cancer has been determined, the doctor will present to you a number of treatment options. It is advised that you take your time to think about each option’s pros and cons before making the final decision.

Following are some of the most common prostate cancer treatment options:

Although these treatments are mostly used one at a time, in certain cases one or more may be combined if the doctor sees fit.

Centre for Robotic Surgery (CRS) is an initiative of Muljibhai Patel Urological Hospital, which is one the best kidney hospital in India famously known as the ‘Nadiad Kidney Hospital’.

A nephrectomy is the surgery done to remove of a part of or complete kidney. This procedure is done for:

There are three types of approaches that can be used to conduct Nephrectomy: open surgery, traditional laparoscopic surgery, and the innovative robotic nephrectomy.

Robotic kidney surgery has been proven beneficial to not just the patients, but the robotic surgeons as well due to its various advantages. At Centre for Robotic Surgery – A best kidney transplant hospital in India, the da Vinci Robotic Surgical System is used by our kidney specialist doctor for kidney cancer treatment, kidney stones treatment and other kidney related surgeries.

The da Vinci Si® Robotic Surgery used at Centre for Robotic Surgery is a state-of-the-art technology which enables the robotic surgeons to perform complex surgeries with great ease and precision. 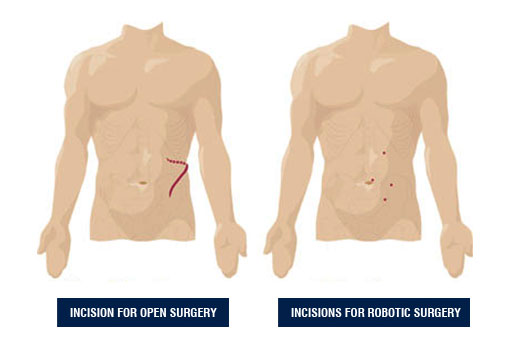 Key elements of a Robotic Kidney Surgery include:

In addition to the above, other procedures involving kidneys are also performed at the Centre for Robotic Surgery – A leading kidney hospital in India.

At Centre for Robotic Surgery – best kidney hospital in India, the state-of-the-art da Vinci Surgical System is used for surgical procedures for kidney cancer as well as other kidney issues.

Long-term studies like this one have shown that robotic surgeries such as Robotic Partial Nephrectomy have less blood loss, minimal effects on renal function, and an excellent safety profile when performed at high-volume centers.

Among the various benefits of robotic kidney cancer surgery are:

The above are obtained due to the various advanced technological features of the da vinci robotic surgical system , which provide better vision and precise movements to the robotic surgeons and help them achieve better results during a surgery.

1. My CT scan/MRI shows a kidney tumor. Can it be cancer?

Usually, most of the kidney tumors are cancerous, but smaller tumors can often be benign (non-cancerous). However, your doctor may still want to remove it since a benign tumour may get bigger later leading to issues.

2. If my cancer has spread will I need to get my kidney removed?

This will need to be evaluated by your doctor who will see how much the cancer has spread and how risky the kidney cancer surgery will be. In some cases, removing the cancerous kidney has helped extend the life of patient having metastatic kidney cancer.

3. What are the chances my cancer will be cured by surgery?

4. What is Partial Nephrectomy?

This is a surgery which is done in cases where the kidney cancer is still small and has not spread outside. In a Partial Nephrectomy, only the cancerous part of the kidney is removed, and the remaining healthy kidney is kept intact. Due to this, there is still some kidney functionality preserved after the kidney cancer surgery.

5. What is Radical Nephrectomy?

In this surgery, the entire kidney along with surrounding tissues including adrenal gland are removed to eliminate the cancer. Unless the cancer has spread widely, usually this is the only treatment required.

6. Why should I opt for Robotic Nephrectomy?

This is mainly because a robotic nephrectomy (robotic kidney surgery) has several benefits that aid in faster recovery of the patient.

7. What is the benefit of partial nephrectomy over total kidney removal?

In certain cases like when the tumours or cancers are small, partial nephrectomy is preferred since it saves most of the kidney while also getting rid of the tumour. This helps maintains better kidney function overall.

8. What types of follow-ups will I require post my surgery?

The follow-up tests usually include X-rays, CT/MRI scans and blood tests, which can be taken care of at our kidney hospital itself.

9. Will I require chemotherapy or radiation therapy along with surgery?

This is not generally required unless the cancer has spread so much that additional therapies are needed. Mostly the best way of treating kidney cancer is surgery itself.

10. How can I learn more about my kidney cancer and various treatment options?

Although we have tried to include a lot of relevant information on this website, it is best to consult an expert in person who can explain the various aspects of kidney cancer and most suitable kidney cancer treatments for you.